You are here: Home / Digital Marketing / 8 Ways to Quickly Identify Spammers on Pinterest 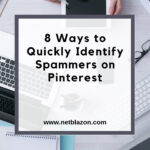 Spammers are nearly as old as the Internet itself. We’ve dealt with email spam for decades now. Social media spam is hardly new, either. And it seems like Pinterest is just a haven for spammers. Perhaps the platform and its robust API (application programming interface) makes it somewhat easy to abuse, or maybe the spammers on Pinterest just make so much money it’s worth more effort. I’m not sure, but I certainly see a lot of it.

I made the mistake recently of following back everyone who first followed me, without checking for quality first. I saw my follower count grow quickly, so I kept doing it! It was easy and I was getting so many new followers. I admit, it appealed to my vanity.

But now I’m over it. I started to see more and more pins of a sort I didn’t want to view, much less save or interact with. (Lots of almost-but-not-quite-porn.)

The bigger problem isn’t just the yuck factor. It’s that the engagement score for my account dropped.

What’s the engagement score, you might ask? It’s a measurement in Tailwind, a tool I use to manage my Pinterest and Instagram accounts. The engagement score is one of the measurements of the quality of your account. In Tailwind’s own words, it’s “a measure of your audience’s Engagement with your Pins, giving you insight into how much interaction your Pins are receiving from each follower.”

I want a quality account that attracts real followers, promotes interaction, and hopefully drives traffic to the sites I’m actively marketing. I don’t want my account to be dinged because I “fell in with the wrong crowd”.

Fortunately, a large number of the spam accounts I had followed back were easy to identify. I thought I would share these with you so that maybe you can help, too. The more we as a community fights against spammers on Pinterest, the better the community becomes. Less spam = better Pinterest!

At the end, I’ll explain how I found and unfollowed these accounts with very little effort. It’s an ongoing process that takes some time, but I’ll explain and you’ll see it’s not hard to manage.

But first, let’s look at some ways to identify Pinterest spam accounts.

1. They Have Multiple Boards with One Pin Each

This one requires looking at the actual account, but it’s an easy flag to catch. If a user has multiple boards and each one has only one pin. This is not normal behavior! No real user actually creates a bunch of boards and adds one pin to each one.

2. They Have Zero Pins but Thousands of Followers

Real people follow pinners because they share similar interests, which are apparent from the pinner’s pins. If the user hasn’t pinned anything, why would someone follow them? There are two reasons:

Neither of those is a scenario that helps your profile be successful. Move on.

3. Their Profile Photo is a Recognizable Celebrity

Of course, some real people might be huge fangirls/fanboys and choose to make their profile image a celebrity, but most of the time these are fake.

I didn’t include an example for obvious reasons. Ew. 🙂

I’ve seen valid examples of this once or twice, but in almost every case, if the pin has an emoji on it, it’s from a spammer.

Additionally, the color yellow is fairly common – either the lighter yellow shown above, or a mustard-y yellow. That’s one reason I avoid yellow background on my pins!

7. They Have Specific Board Names

Spam accounts generally aren’t created by hand. Their creation is automated with bots or the Pinterest API or who-knows-what. As such, you’ll see a lot of common threads in the board names.

Any pinner with a board called “OMG / BIZARRE” or “OMG/WTF/Bizzarre/Weird” or “Facts Pins” or “PIN IT” is a spambot. Just try Googling the second board name I just listed. I got 182,000 results. There are not that many people who created boards with the same name containing a misspelling.

Note the mustard yellow, too.

8. They Have Predictable Board Groups

In this example, the board names themselves aren’t bad. But I literally had 30-40 followers who all appeared to love dogs, DIY, and cars…and nothing else. It was enough for me to notice the trend. There are likely other common groupings as well.

The image above shows three different accounts (one per row).

But what if you’ve already followed them?

That’s when you’ll want to go through and unfollow them. I use two methods to do that. Both are explained from a desktop / laptop computer perspective above. I don’t bother with the mobile app for this because a computer is faster.

When you go to the Pinterest homepage, in the upper right you’ll see the word “Following”, right next to “Home”. That’s the feed of pins by people you follow.

The Pinterest homepage uses an algorithm to decide what to show you, but “Following” contains only pins from people you follow (and ads, of course).

I load up this page, scroll to the bottom, wait for more pins to load…and repeat until it stops or I feel I have enough. Then I scroll through looking for spam pins. I’ve gotten really good at doing this at a quick glance. With some practice, you’ll find it quick to spot the obvious ones too.

Then, click the Pinner name for the spam pins. That takes you to their profile page. Click the Unfollow button to unfollow their entire accounts (all boards).

You can also click the Flag button to block them if you prefer.

The following page is reached by clicking your profile picture/name in the upper right, then clicking Following. Or you can just go directly to the url, which has the format
https://www.pinterest.com/YOURUSERNAME/_following/

Now, you’ll often need to look at the profile itself to make sure they’re a spammer. Real people can be pretty girls or have their dog as their profile image. It’s just common for spammers and bots to also use these.

Efficiency tip: if you hold down the CTRL key on your keyboard while clicking, it opens the links in new tabs. Then it’s easy to go through each one, review, and unfollow. I find it faster than doing it one at a time, all in the same tab.

What about you? Did you fall for this trap and you’re trying to clean up now too? What tricks do you have up your sleeve to unfollow spammers on Pinterest? Share in the comments below.